Air purifiers are the most fundamental products to have indoors. If you or anyone around is living with a severe illness, an air purifier is a worthwhile investment.

If you’ve stumbled upon this article, chances are you are in quest of an inexpensive gear that makes your room — a cozy, clean, breathable space. In this in-depth review guide, we share hands-on experience with a popular yet affordable air cleaning machine — Levoit Vital 100. 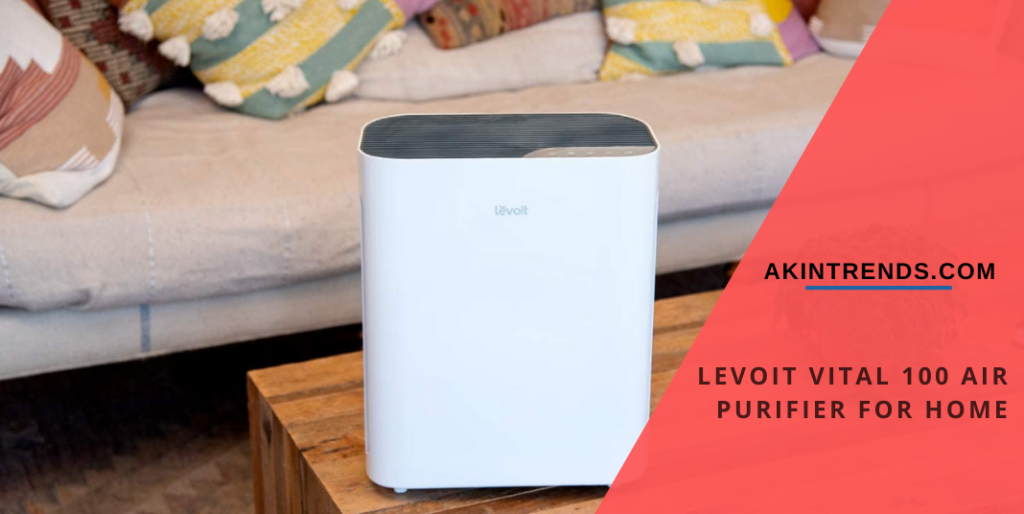 Levoit is a widely-popular air purifier for home brand originating from the United States. With Levoit’s air purifier models available in plenty, choosing one that fits your criteria is not that hard.

We cover a few critical aspects of Levoit’s Vital 100 air purifier that may inspire your purchase decision. Scroll down and learn about the experiences we’ve had with this feature-rich and powerful air purifying machine.

The Levoit Vital 100 shares almost an identical appearance to the brand’s previous models — it is bulky, plain, and boasts a straightforward look. Measuring 16.1 inches in height, 12.8 inches in depth, and 6.4 inches in width, this air purifier is taller and wider than other models. 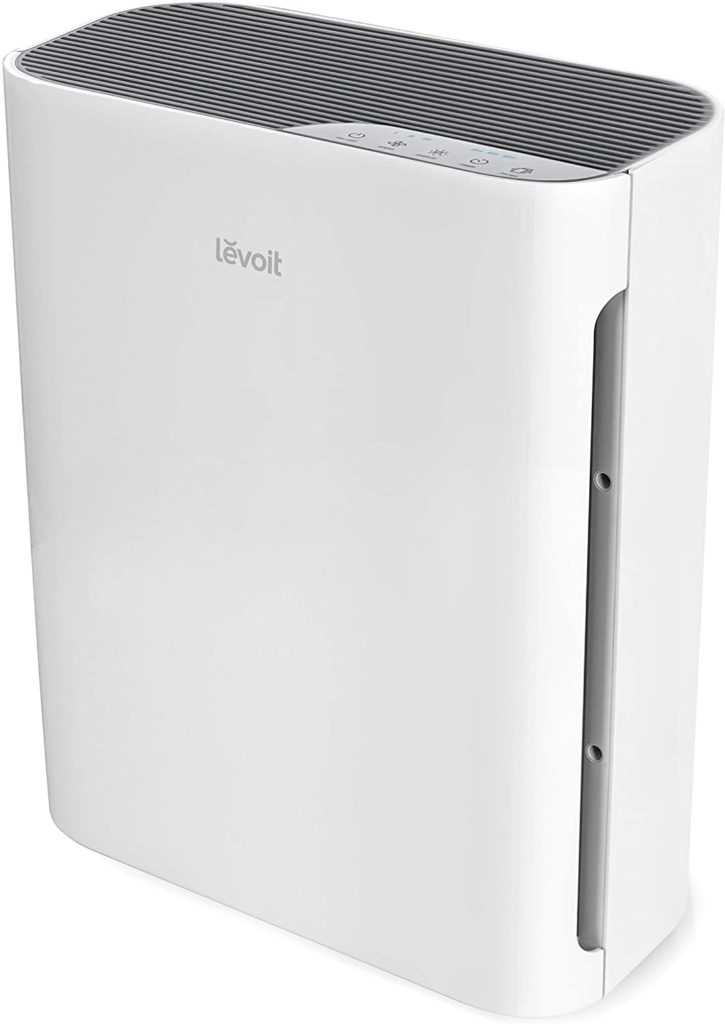 Embossed with white ABS plastic, the Vital 100 sits perfectly to the backdrop of any room. Boasting of larger parallel air grills on each side of the device, this comfortably takes in the room air, with an outlet vent that dispenses cleaner air into your room.

For smooth control over the air purifier, the Levoit Vital 100 has a control panel with five functional buttons located on the top. On the flip side, you don’t get smartphone accessibility. The Levoit Vital 100 weighs about 10 lbs, which makes moving and lifting a pretty simple job.

Overall, the design isn’t a visually appealing one; but with a simple and discreet look, it gives you the minimalist appearance.

The Vital 100 is paired with some of the finest filtration systems available on the market. To ooze out the purest quality of air, this device uses a three-stage air cleaning system. This process effectively annihilates most of the harmful pollutants from your space. Following is Vital 100’s three-stage filtration process: 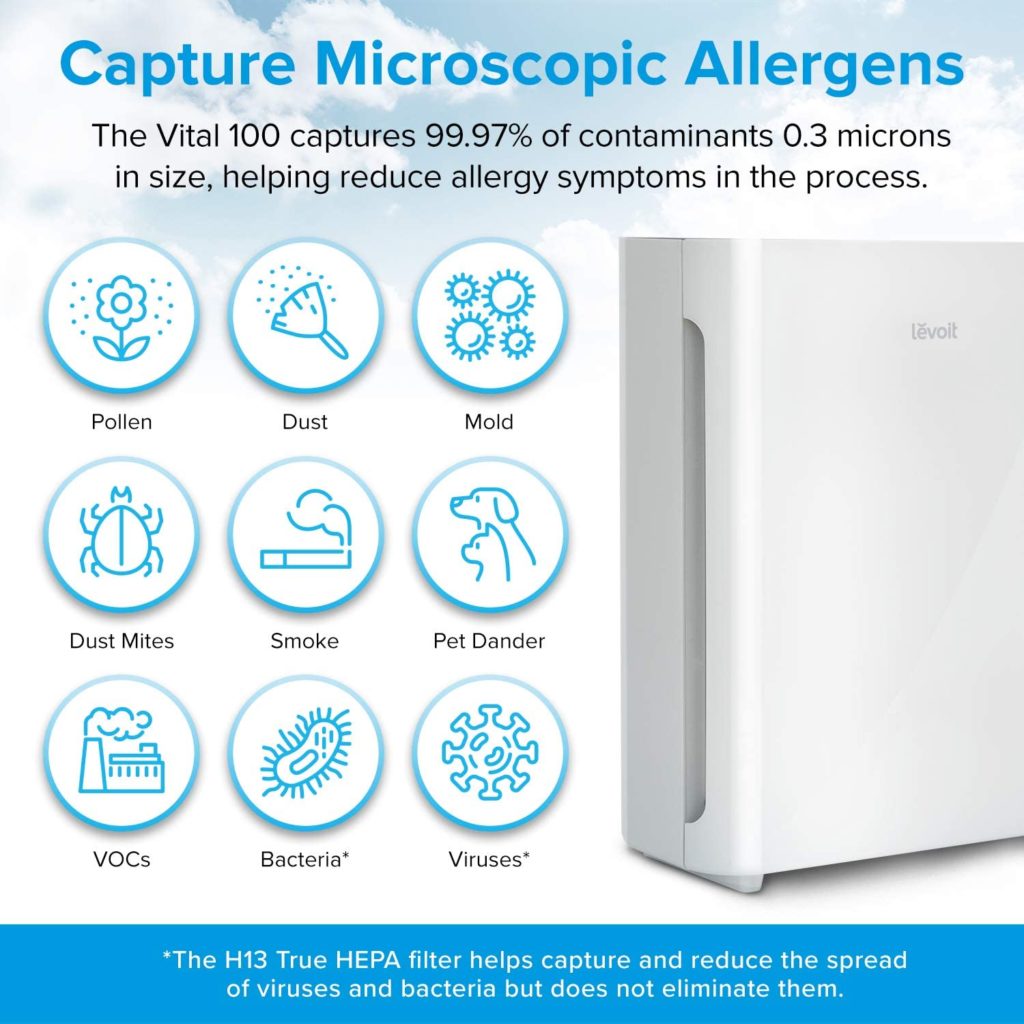 The aforementioned three-stage filtration system is entirely ozone-free, which is harmful if you have pets around. There is no denying that one of the primary selling points of the Vital 100 is its efficacy in removing pet-related allergy symptoms.

Levoit’s Vital 100 filter, Vital 100-RF, is replaceable and available on major e-commerce sites. We recommended you keep a check on the filters, in order to make sure it lasts longer and oozes out some clean and fresh air.

The Levoit air purifier for home is compatible with smaller rooms up to 300 square feet in size. However, two notable ratings determine the machine’s performance — CADR and ACH. Read on to know more about these ratings.

This air purifier is supplied with the CADR (Clean Air Delivery Rate) rating of 130 CFM, which is reasonably low compared to pricey machines with 200 CFM CADR ratings. 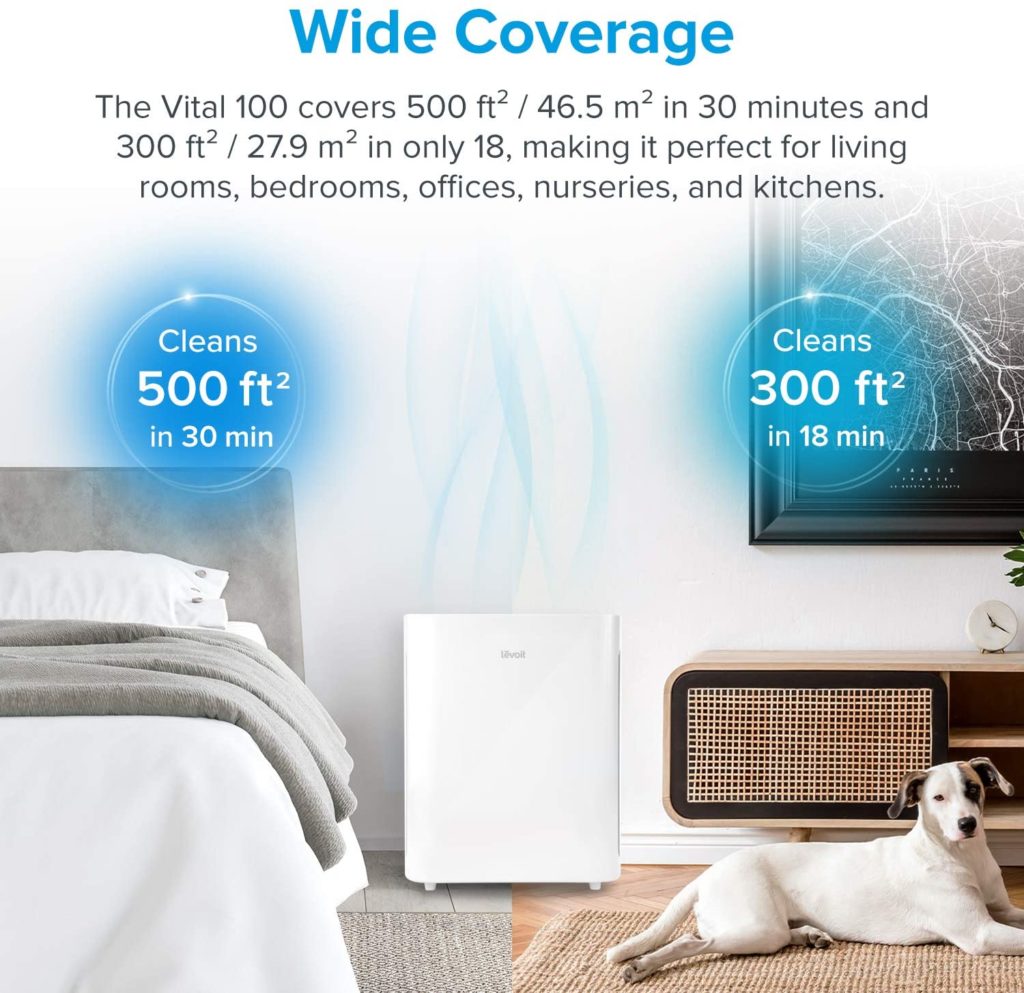 The CADR rating indicates the air purifier’s effectiveness in removing contaminants like dust, smoke, and allergens floating in the air. For quick and reliable cleaning performance, ensure that rating is ⅔ the size of your room.

While the ACH or Air Changes Per Hour rating of Vital 100 stands at 4X. This rating signifies that it can change the volume of air four times each hour in a 300 sq.ft. room. Nevertheless, this machine can also be placed in 500 square feet; however, the ACH ratings may drop to 2X, meaning that the Vital 100 will clean air twice each hour.

Reviewers have advised that although this unit supplies fresh air in larger rooms, placing them in smaller spaces is beneficial for those suffering from respiratory illnesses.

Levoit 100 has an unrivaled list of features that makes high-end air purifier systems blush. This is laden with features from top to bottom, from outside to the inside. This rectangular-shaped air purifying system has a control panel at the top, featuring easy-to-access buttons.

The control panel boasts of a few settings — fan speeds, timer, filter replacement indicators. The Fan speeds allow you to switch the airspeed between low, medium, and high speeds. Meanwhile, the timer feature allows you to schedule between 2, 4, and 8-hour increments for switching off the machine automatically.

The Filter replacement lights serve as a reminder to change the filters of the device. Usually, these lights start reminding after a particular period (i.e., after six-eight months) and not based on your filters’ condition.

The features listed above are some of the basic ones, however the best for the price you pay for. The major misses from this device WiFi connectivity, smart-sensor, and access to apps.

The Levoit Vital 100 is a compact and subtle air purifier with a robust filtration system and a few notable features. Although not as significant as top-end models, it promises to offer its efficacy in small to medium-sized rooms. Below are some of this device’s benefits and shortcomings:

There is nothing that can beat the Vital 100 at this price range of under $200, but a few counterparts must not be overlooked. Here are some of the alternatives to Levoit’s Vital 100:

Honeywell’s HPA300 is an excellent alternative to Levoit’s Vital 100. This air purifier comes with a True HEPA filter and Activated Carbon filter that work together in eliminating dust, allergens, and odors from the air. This device is capable of cleaning areas up to 465 square feet. 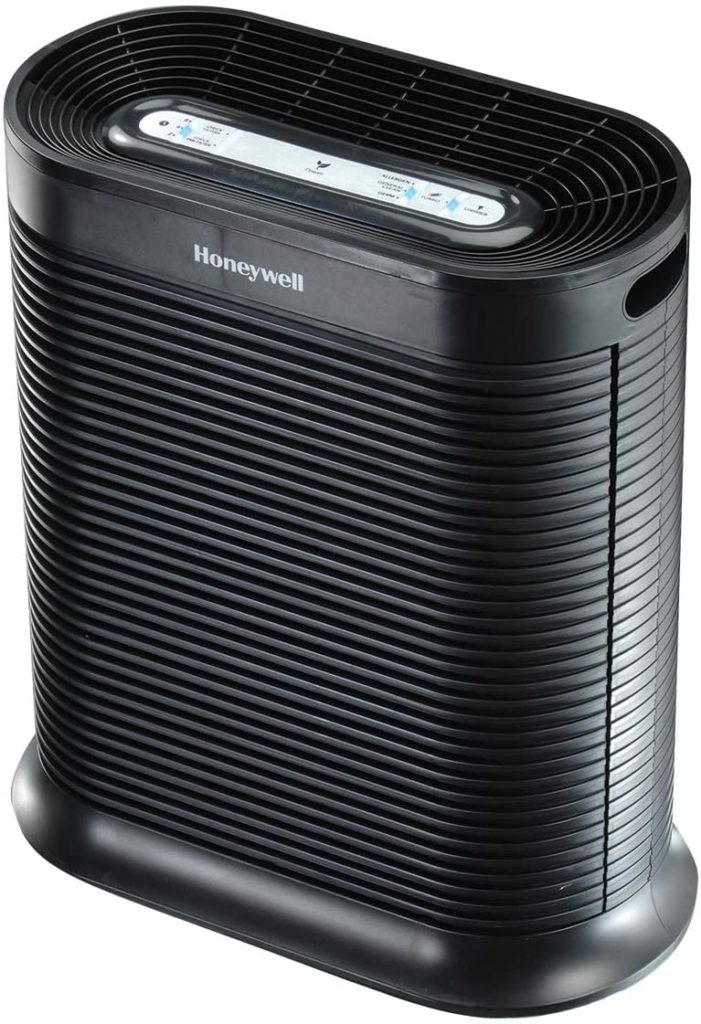 The Honeywell HPA300 is supplied with quality features such as the automatic shut off timer with 2, 4, and 8-hour increments, turbofan mode, and easy-to-use control buttons. Also, it comes with a five-year warranty and a filter change indicator.

Another significant alternative is the Winix’s budget-friendly offering, 5500-2. This air purifying device carries filters like the True HEPA filter and Activated Carbon filter; however, it is powered by the patented PlasmaWave technology. This feature cleans the entire space without producing harmful ozone or other pollutants. 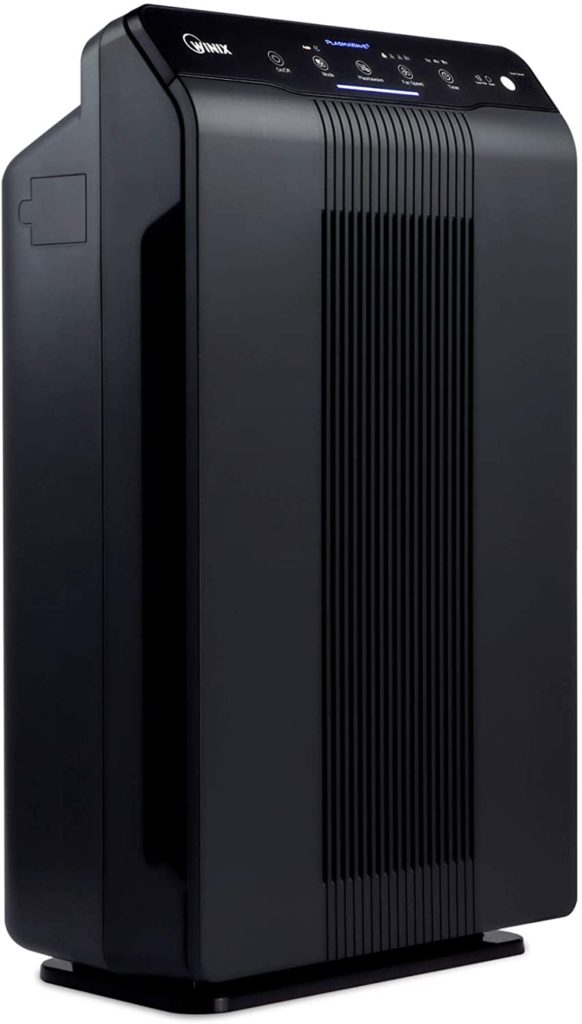 The Winix 5500-2 also boasts smart sensors, which automatically adjusts the fan speed for better cleaning. This air purifier can clean rooms up to 360 square feet.

The cheapest of all — GermGuardian AC4825 is home to some of the excellent features that aren’t common in the low-priced models. This boasts of True HEPA filter and Activated Carbon filter and works with UV-C lights to easily remove airborne viruses.

The AC4825 is supplied with 3-speed settings — low, medium, and high. Each of these settings is ultra-quiet and offers good night sleep. There is Titanium Dioxide, which keeps volatile organic compounds at bay.

And this was our Levoit Vital 100 review. If this power-pack machine runs out of stock, hope the alternatives we listed could come in use. Each of these machines is also excellent in delivering clean and fresh air. The Levoit Vital 100 does put an end to your search for the best, inexpensive air cleaning machine.

We appreciate your comments! Let us know in the comments section if you have questions or queries about this device.

Yes! The Levoit 100 is equipped with the activated carbon filter, which alleviates the smoke odors from your home. A word of caution from the manufacturer is that — smoke smells may be reduced, but the filters are likely to get dirtier.

The Vital 100 works effectively in removing harmful particles no matter on what level it is placed. The general rule of thumb here is to either locate it on a shelf or a dressing table.

The Levoit Vital 100 is a product for all those home-owners looking to better their health and make the air around cleaner and fresh. However, a specific group of people that this device mainly caters to, are:

This website uses cookies to improve your experience while you navigate through the website. Out of these cookies, the cookies that are categorized as necessary are stored on your browser as they are essential for the working of basic functionalities of the website. We also use third-party cookies that help us analyze and understand how you use this website. These cookies will be stored in your browser only with your consent. You also have the option to opt-out of these cookies. But opting out of some of these cookies may have an effect on your browsing experience.
Necessary Always Enabled
Necessary cookies are absolutely essential for the website to function properly. This category only includes cookies that ensures basic functionalities and security features of the website. These cookies do not store any personal information.
Non-necessary
Any cookies that may not be particularly necessary for the website to function and is used specifically to collect user personal data via analytics, ads, other embedded contents are termed as non-necessary cookies. It is mandatory to procure user consent prior to running these cookies on your website.
SAVE & ACCEPT